Recently I had a chance to walk around Melbourne’s CBD, and I got fascinated with the wealth of photographic opportunities! You just have to keep your eyes open. I think such walk with a camera could also be a great exercise for any photographer. I have to admit, I just did it for fun… and I loved it!

Ok, let’s see what I’ve got for you this time: 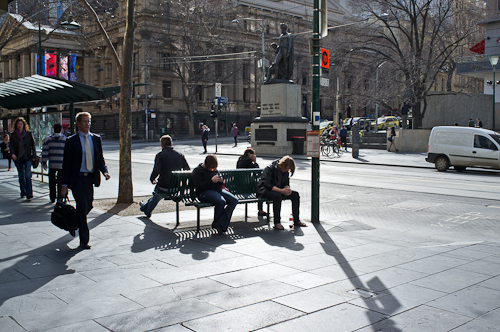 The photo above is one of my favorites from that walk. There are several compositional connections in it, and while not all were intentional, nevertheless they all contribute to the composition. The most emphasized being the people sitting on the benches, three of them using their mobile devices and the fourth person might or might not use his device, and this fact creates additional interest. Another connection is between the walking man on the foreground left, and the walking woman on the background – these figures are connected with a virtual diagonal line. Third compositional connection is between two standing figures in the background. There is also an additional connection which I won’t mention here – think for yourself what is it and write your conclusion in the comments below.

Overall, I think, this photo creates a pretty good picture of “urban life”.

I took the next photo in one of the alleys. The restaurant wasn’t open just yet, but in the kitchen it was business as usual as they were preparing for opening. You must see this photo in a bigger size (just click on it). Walking through that alley first I was fascinated by the graffiti on the walls and then I saw the kitchen staff working inside, and immediately noticed the contrast of the inside/outside. I took a position in which the reflections of the graffiti on the opposite wall would be most visible in the windows to give a better idea to the viewer regarding the outside world, and waited for the one of the workers to make any articulate move. The result you can see below. 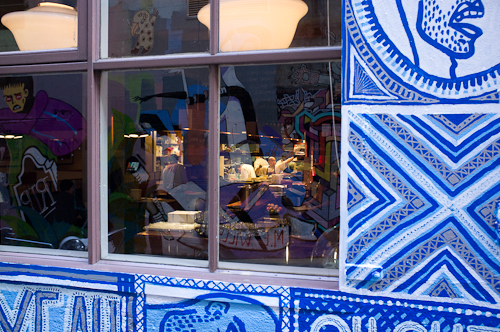 The photo below… yes, I know, photographing reflections and turning the photo upside down had become a corny trick, but in this case I just couldn’t help myself. 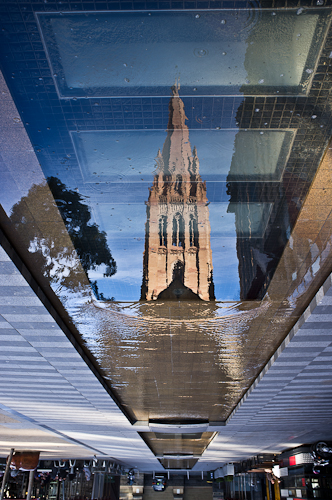 The next photo shows a true moment of interaction between two people (my opinion of course), and this is why I like it so much. Catching  such moments is not as easy as it might seem (people are interacting all the time after all!), and I got lucky with this one. 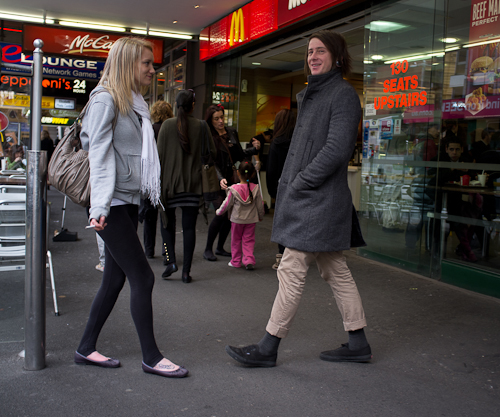 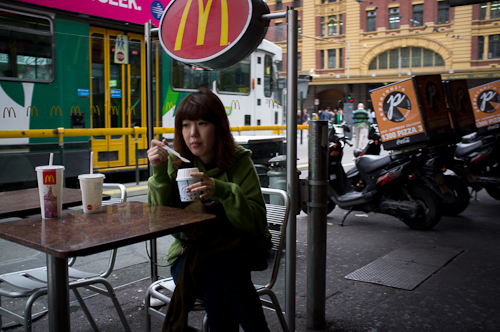 Next photo is an interesting one as there is a compositional conflict of directions… I just made this term up! Here’s what I mean – the group of teenagers are all looking left, also the “one way” arrow points to the left – all making the viewer wonder what’s there, and then you have the man standing in the center of the composition facing straight to the right, and even though I used the word “conflict” in my description of the photo, I still think that it is compositionally balanced because the compositional weight of the group of teenagers and the arrow is balanced by the weight of the man, though he is a single person opposed to the group, but he is in the center and his “sense of direction” is stronger. 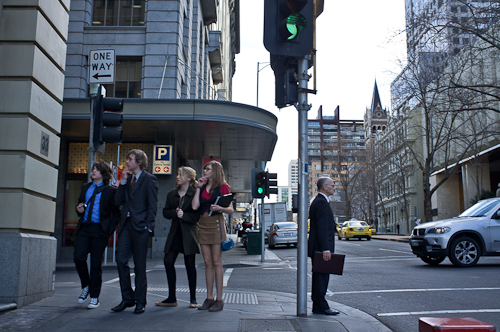 I have mixed feelings about the last photo, but I still decided to present it here. What I like about it is that it is a collage without any photoshop, and also a slight surrealistic feel that it communicates. What do you think? I would appreciate any thoughts on this one. 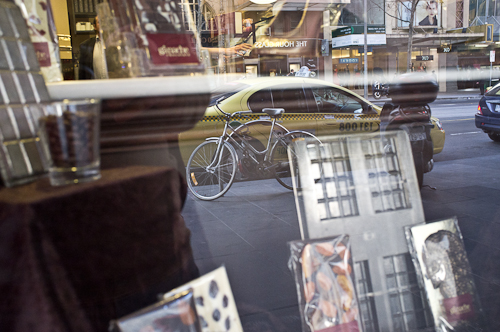 As always, your comments are appreciated!

Yesterday I visited Melbourne’s CBD, and had a chance to take a few photos in Docklands area. Afterwards, when I was going through them on my computer (most of them weren’t anything special 🙂 ) , one photo grabbed my attention. 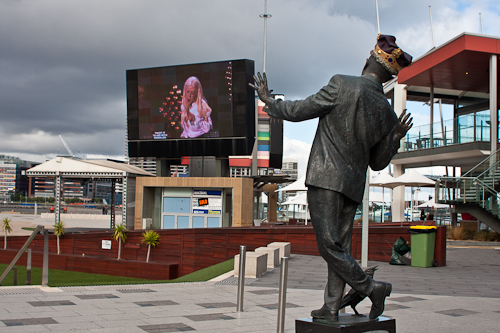 When I was making it, I simply thought it would be a good idea to capture the singer on the big screen in an interesting pose so that I would have both, statue and singer ‘posing for the camera’.

But when I was looking at the photo later, on my computer screen, I’ve noticed that it has very ‘dynamic’ feel. I could feel the movement of the statue, as if it was a live person. So I started thinking – why is that happening? Why is the statue, which didn’t look that much ‘alive’ in reality, came to life in my photograph?

And here is my conclusion: it is because I created Interaction between the statue and the singer. It looks like the statue ‘responds’ to the movement of the singer, and since we all have no doubts that the singer is a live person, that feeling also ‘spills’ onto the statue.

It is very interesting effect, which can be used when photographing other situations. Even with this same statue – if instead of singer a real person would be somehow interacting with the statue, it would also make the statue come to life. For example imagine a bunch of kids dancing around it.

As always your thoughts and comments are highly appreciated!

Recently I wrote a post about magnificent photographer Alexander Petrosyan. I was very impressed with his work, so I wrote him an email asking for an interview for my blog. And guess what? He kindly agreed! 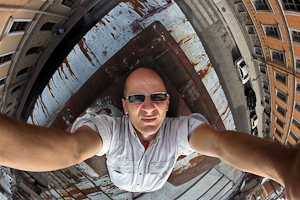 Tell us a little about yourself. What is your occupation,  how did you get interested in photography?

My introduction to photography was terribly banal: as well as many of my peers back in those years, I was presented with a camera named “Smena” on my birthday 🙂 Since then I periodically quit and came back to photography many times. Currently I am a full-time photojournalist for publishing house “Commersant”. 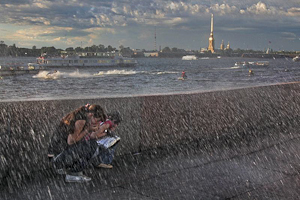 How many of your shots were initially conceived in your mind and then “materialized”?

I don’t have many such shots. Much more often happens the following scenario – I have an idea in my mind, but according to the situation this idea transforms into something else, which in turn on the photograph again looks different, and the viewer sees what he sees.  That’s why the title of my blog is “In reality things are somewhat different than in real life… ”

What is the story behind your shot titled “Graduates” ? 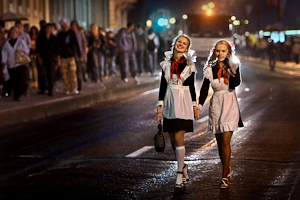 This photo was made in the most ordinary way – I saw this couple, which was very different from the rest of the crowd of graduates, and I just ran in front of them shooting continuously. Technically it wasn’t an easy shot to get using Canon 20D, because its max ISO was 1600 while I had to shoot hand-held, running backwards in front of the girls. I nevertheless managed to get a fairly sharp shot.

How do you manage to be in the right place at the right time?

It doesn’t happen too often, at least not as often as I would like… in simple cases what helps is the analysis and prediction of the situation. In more complicated situations I just hope to get lucky. 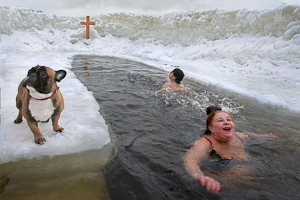 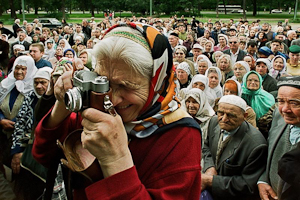 Isaac Newton once said, “If I have seen further, it is by standing on the shoulders of giants”. Who are your giants?

The saying, which is actually closer to my perception is “Do not make yourself an idol”. There are not a lot of key figures in photography, and they are known to anyone interested in the subject. But to narrow the circle and take for example my colleagues from St. Petersburg, who I have met in person, I would name an urban photographer Boris Smelov, and photo-essayist Sergei Maximishin. 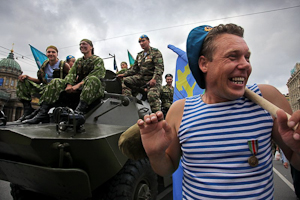 What are your thoughts about Cartier-Bresson’s work?

What do I think about Cartier-Bresson? Well, that’s like asking, for example, physicists, what do they think about Newton or Einstein 🙂 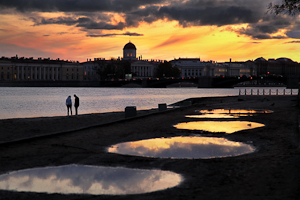 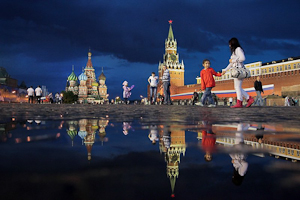 What equipment do you use and why?

I use whatever equipment is available to me. Currently it is a DSLRs from the publishing house where I work with a standard set of glass:16-35, 24-70, 70-200… nothing special, but it is sufficient for most of my work. 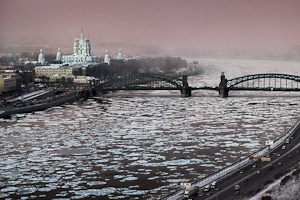 And last but not least my traditional question: if you could give just one piece of advice to a beginner photographer, what would it be?

My advice for beginners is not original, but it comes from my own experience: look at the works of masters, and shoot as much as you can experimenting a lot… and of course do not be embarrassed by critique or its absence and show your work to lots of different people… But, perhaps the most important thing is to shoot what you really love! 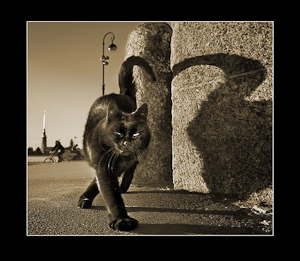 Thank you Alexander for your time, your knowledge, and your photographs!

If you liked Alexander’s work and want to see more of his great photographs check out the links below:

There are a lot of great photographs and talented photographers out there, but there are a few that stand out. To me at least. And I don’t judge by the publicity of their names, only by the impact their work has on me. You all must know guys like Joe McNally, David Hobby, and David DuChemin – they are all over the place, and don’t understand me wrong, I read their blogs, check out their photographs, and learn from them, but there are photographers out there, who are not nearly as famous as these guys, but whose work is at least at the same level, and even better. Of course it is only my opinion, but then again – it is my blog 🙂

I would like to introduce you to one such photographer. His name is Alexander Petrosyan, and he lives in St. Petersburg, Russia. He is a street photographer mostly photographing in St. Petersburg. I don’t have to say much about his work – his photographs do it perfectly. His work reminds me of the famous Henri Cartier-Bresson. The situations that Alexander freezes in his photos tell their stories so vividly and so impressive.

Unfortunately most of his work displayed on Russian web sites, hence the titles of his photographs are in Russian, and in many cases the title adds an important bit of information to Alexander’s photos.

I don’t have Alexander permission to display his work on my blog, so I am just going to give you links to his work. If you would like to understand more about any specific photograph but struggle with the language barrier :), feel free to ask me in the comments to this post, and I’ll do my best to explain.

As always your comments are appreciated!