Recently one of my friend’s friends, Renata, saw these portraits I shot about a  month ago, and liked them. So we decided to do a studio photo shoot with her. When I said “studio”, I meant a tiny studio that I put up in my living room. It consists of a black or white background, one light stand with Canon EX430 flash inside soft box, and one tripod converted to light stand with Yongnuo flash and white shoot-through umbrella.

Shooting in my home studio I am limited by the size of my living room, so I can’t use any focal length I want. The biggest zoom I can use is about 100mm. In that case I have to stand at the far end from the model, and still be able to shoot almost only head-shots.

The following photo was made using Canon 100mm f2.8 macro lens. Even though when shooting studio portraits I usually use my soft box as the main light, in this photo my main light was the Youngnuo flash through white umbrella from the left, and I used my soft box as hair light from the top right and it also acted as a fill in light to soften the shadows.

I placed the lights at such angles so that almost no light would spill on the background as I wanted the background to remain black. It is intentional that the Renata’s dress is also black and looks only slightly lighter than the background – I wanted to make an emphasis on her face. 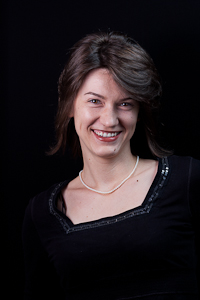 Continuing the discussion regarding the photo above – shooting that portrait I looked for Renata’s natural expression. At first she was a bit constrained trying to pose for the camera, but then we started a conversation about all kinds of topics and she got more relaxed. At one point I put the camera down and we continued speaking about a particularly interesting subject for her, and I noticed that she  got completely relaxed. So I grabbed a camera and started shooting.  This is when I got the shot above.

Next photo is posed, of course. It was my idea to shoot Renata with a candle, but after trying everything I had in mind, I couldn’t make a single nice photo. Then I asked my model to do anything she liked with the candle and just watched and shot. After a while I saw her making this pose and thought – “this is what I was looking for!”, so I asked her to remain in that pose and shot several variations. The photo below is the one me and Renata liked the most . 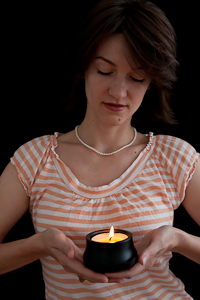 In the next photo, I wanted to try a bit more dramatic lighting with stronger shadows. One of my primary concerns was to make her left eye (the one to your right when looking at the photo) free of shadows coming from the nose. I wanted it to be as vivid and visible as the right eye, and still to have strong shadows. This involved moving the main light around the model until I found the desired angle. All my flashes were set to manual mode, so in order to achieve stronger lighting I just increased the power of the flash. 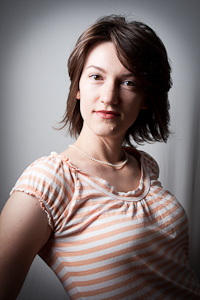 One more aspect to think about is the flash recycle time. I use small strobes (Canon EX 430 and Yongnuo), which are powered by 4 AAA batteries. Using such strobes at full power means waiting two to five seconds between shots, loosing priceless facial expressions and body poses. So I never use my strobes at full power unless I absolutely have no choice. I usually don’t go above 1/4th of the full power and set ISO and f-stop accordingly (taking the DOF into account of course).

After getting a few decent portraits, which were the main goal of the photo shoot, we started to improvise. I particularly liked the shot with the sunglasses. I liked Renata’s expression in that one – it is radiant and tender at the same time. Of course I didn’t get this shot on the first try, but the final result is what counts, right? 🙂 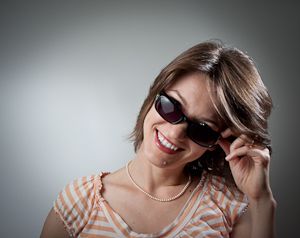 The following photograph is my favorite. I love the dynamics of it. For this photo I had Renata stand facing the background and then turning swiftly around on my mark. I really wanted to catch that hair movement. It wasn’t as easy as it sounds because at each turn hair moves differently, and it doesn’t always look as nice as in the photo below. I probably did about 15 shots before making this one. 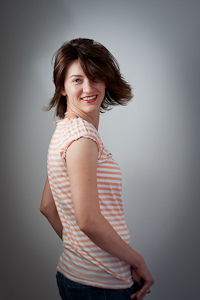 I really enjoyed this photo shoot and I am pretty satisfied with the results. I find the background a bit boring, therefore thinking of my next photo shoot to be on-location somewhere.

I hope you found this article to be helpful and interesting, or at least one of these 🙂