About three months ago I wrote an article about my work with still life objects. I’ve been continuing photographing still life since then and experimenting with different ways of post processing the images. In this post I will show some of my more recent works. Click on the images to view larger version. [one_half] Here, on the contrary, I wanted to create a more complex image with additional elements. My main problem was to choose these elements so that they would fit harmoniously into my composition. I’ll leave it up to you to decide whether I succeeded or not.  [/one_half][one_half_last] [one_half]I especially like this image, mostly because it wasn’t easy to come up with the idea for it. I started it by trying various compositions of glasses and the bottle, and various liquid levels. After I achieved something that looked good to me, I still felt that something was missing from the image. So I looked around for an item to add, and decided to add the two marbles. But I needed an aesthetic way to place them, and after a while I solved this puzzle with a spoon. I made a couple of shots and still wasn’t completely satisfied with the results. Suddenly it hit me that these marbles on the spoon look like musical notes! To make this idea more visible I added musical sheet to the background and the photo frame, and finally I felt the image was complete. [/one_half] [one_half]This is my best still life image to date. It has an interesting idea and a nice execution. In addition this image was accepted to 1x.com !!! It was my dream to have my image featured there, and I finally achieved it. You can see it on 1x.com here. [/one_half] I already wrote about wonderful Czech magazine that was being published during the 50’s – 90’s of the 20th century. In short, it was very good photography magazine, with great written material and superbly chosen photographs. In this post I am going to share my favorite photographs from the third issue of the year 1965.

Since lately I’ve been getting more seriously into portraiture, I will start with portraits.

The following portrait reminds me of the girl Mathilda from the movie “Leon” (it is also known as “The Professional”). I think it is a great portrait depicting a strong character of this girl.

Portrait of a Girl by Antonio Damiani

While the photo above shows us beautiful and strong-minded girl, the next photograph is of a woman, with a wise and calm glance. This portrait gives me a sense of confidence and maturity. Next photograph beautifully shows the human body as part of nature, as something that is inseparable from its surroundings. Summer in the forest by Zdenek Virt

I find portrait of a widow by Milosh Kudera to be very strong. To me it possesses the quiet strength and determination of a person with profound life experience. What I like the most about the next image is how the slight turn the body conveys beyond any shadow of a doubt that there is conversation going on. Next is a portrait of Albert Schweitzer , was a German and then French theologian, organist, philosopher, physician, and medical missionary. Last but not least is a portrait of an old sailor by Paul Strand. In this image I see a modest man, who is used to look down at his feet, but who can undoubtedly stand his ground when he has to. I hope you enjoyed this short voyage to the past. I might have misspelled some photographers names, so if you know better, please leave me a comment and I will fix it.

Also, if you liked these photographs, you can download the free PDF album that I created using photographs from another issue of this magazine.

Greetings, I am back from my vacation!

I had three unforgettable weeks of trekking in Nepal, saw and photographed unbelievably beautiful mountains, and different cultures. More about that in my future posts, in which I will share my photographic experiences and, of course, photographs from my trip. Few of these photos you can already see on my Facebook page:

Now I would like to go back to the article that I started writing before my vacation, but didn’t have time to finish.

There are different ways to tell a story with a photograph. Photojournalism is one of the most common. There are also various kinds of creative edits. For example, Katerina Lomonosov creates great story-telling works of art, which stir the viewer’s imagination. Landscape photography in addition to showing the beauty of nature can also sometimes tell a story of the photographed place.  Thinking of it, any kind of photography tells a certain story, and this fact is what makes the viewer to look at a good photograph for more than a brief moment.

I don’t remember where I saw this quote: “If you want to tell whether a photograph is good or not, hang it on your office/home wall. If after a week (or so) you’ll still enjoy looking at it, then most of the chances that it possesses artistic value”

A few days before my vacation I was buying food in our local supermarket, and I’ve got the idea to photograph ordinary people that I saw there and to try and tell a story of “people in the supermarket”… you know – to see extraordinary in the ordinary. I used my iPhone to photograph these people because it was be the most discrete way to do it. I wanted to capture them in their most natural environment, doing everyday chores (in this case – shopping).

So when I came home I had a collection of photographs, which I needed to somehow combine into a single photo. After playing with the idea for a while I decided on a collage, and here’s the final result:

To create this collage I loaded all the photos as layers into a single Photoshop file, and then used layer masks. The most difficult thing was to choose photos for the collage, and then to arrange them. Another problem was the choice of background.

I hope I succeeded to tell a story with this image, but I will let you be the judge of that.

As always, your comments are highly appreciated!

When a person looks at a photo, he (or she) can almost immediately say whether he likes it or not. In rare cases it can take a while, but eventually you can either like the photo, not like it, or stay indifferent to it.

But have you ever tried to ask yourself exactly why do you like or don’t like the photograph? It is much more difficult to pinpoint the reasons for which you feel about the photo the way you do.

In this post I am going to present three photos that I made during one of my visits to Prague, and try to explain why I like them. It will be a good exercise for me, and also a good experience for you, my readers. You might agree with my observations, or might not, but in any case I hope to help you to be more conscious not only when looking at images, but also when creating them. 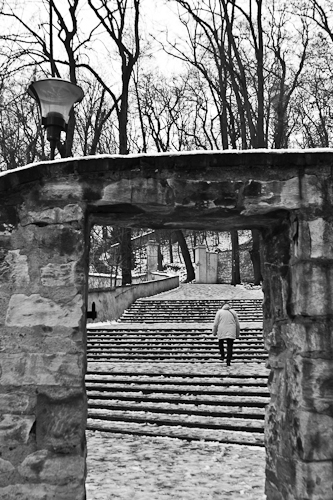 I like the photo above for several reasons. Main reason being that it creates a winter-cold feeling, and gets me in the wintery mood. How it does that? Well, first of all the B&W helps – it emphasizes the lack of colors on a typical overcast winter day. The lonely figure also adds to the mood. Imagine for a moment that instead of lonely figure there would be bunch of kids playing with snowballs – would that add to the mood that I’m talking about? Of course not. Considering everything else in the photograph would remain the same, they would create a contradiction by adding playful joy and “bright colors” into pale surroundings. This is why lonely figure is much more appropriate for this photo’s aim. What else? The bare trees and the snow on the ground of course. In addition there is also a three-dimensional feeling to this photo created by the narrow gate at the front leading the eye to the stairs and further on into the photo – different planes create a feeling of space, and the small human figure looks even lonelier in this space. 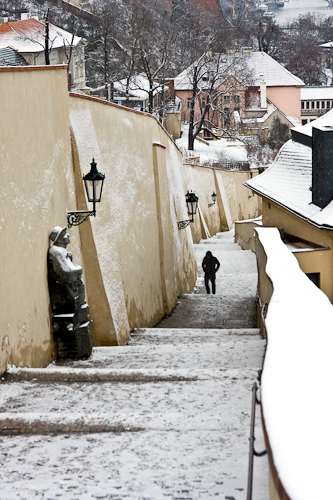 Here is another photo of a snowy winter day, and also with a lonely human figure 🙂 What can I say, these photos were taken in the winter, it was cold and I was in THAT mood. I didn’t convert this photo to black and white because I didn’t feel that it was needed. On the contrary, I wanted the snow on the wall to be distinguishable, and the wall being colored helped that. There are several rhythms in this photo – the rhythm of the street lights, the rhythm of the columns on the wall, and the rhythm of the stairs, all creating a sense of harmony. The human figure has strong visual connection with the statue and the viewer’s eye travels between the two. This connection also prompts us to “humanize” the statue, to think of it as if it was a human figure standing there. These two figures are located in the frame in a way that creates compositional balance. The statue in front “tilts” the balance to the left, but the human figure “counterweights” it by being in the center. The statue is bigger, but because it has snow on it, it is brighter, and bright colored objects are perceived as light by the human eye, while human figure is smaller but it is much darker and thus perceived as “heavier”. 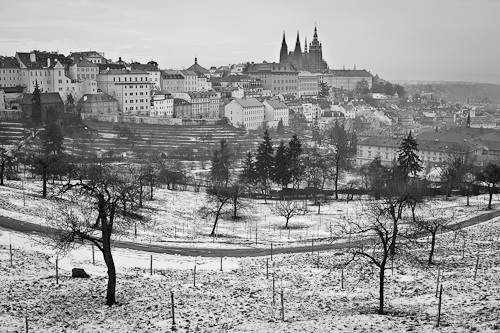 This last photo is my favorite. By the way, it almost didn’t need the conversion to B&W – the colors were missing from the world that day…

The arched walking path and the bare trees standing on its sideways create a sense of swirling motion around the city buildings with St. Vitus  Cathedral rising in the middle and being steady as a rock.  The horizontal lines in the middle background also add to the motion feel. It is almost a scene from fairytale with a mystical castle and enchanted trees.

Actually, besides what I wrote in the paragraph above, I find it hard to explain why this photo has such a strong impact on me, and maybe you can help me out here. How do you feel about the photos presented in this post, and this last photo in particular? And more importantly why do you feel that way?