The first great and glorious era of modern art left the stage to the accompaniment of shots of World War II. Photography, ever since the Man Ray, and Laszlo Moholy-Nagy, sought after its particular poetry, took over the role of the informant, an agitator and propagandist. Editorial images from the war and political life of the rear attracted attention and aroused the emotions much lighter and stronger than the most sophisticated pictorialistic shot, which relies on the beauty and harmony of the plot and form. Reportage photography, having unprecedented resources and technical equipment at its disposal during the wartime, realized its power. It rejected the simple descriptiveness, making the photographic document into a work of art.
After the war, the attitude of a busy and feverishly anxious world towards photography hasn’t changed. News and reportage photography began to play a leading role, while the amateur photography, which affected profoundly the photographic industry, followed its steps. This was not at all surprising: the increasing number of magazines consumed tons of photos. Intense competition demanded for original, unique shots. An unexpected opportunity unraveled before the amateur photographers – to bring their images into the world of professional photography. 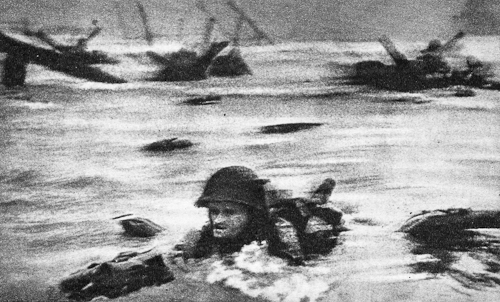 Photo by Robert Capa. Click on the photo to enlarge.

“Earn with your camera!” – Called ads in newspapers and magazines during the 1940s and 1950s as strongly as ever: “Photograph, and your life will be richer!”.
The quality of newspaper photography was growing rapidly. A new type of photography emerged, it served for the artistic decoration of newspapers, which before the war, editors firmly rejected as unnecessary clutter of valuable newspaper-space. Competition with television forced photographic magazines to compensate for the lack of “currentness” by perfection of technical execution and aesthetic impact. Painstakingly prepared photo-essays began to appear. And at the head of this new direction was the “Magnum” agency with amazing images of exotic, incredibly bold frames.

“MAGNUM” again revived the fashion for “pictures of everyday life,” which found the most complete and artistically most significant expression in the collection of photographs of Cartier-Bresson, published in a book titled “The Europeans”, in Paris in 1955. Under the influence of work of Robert Capa, David Seymour, and Cartier-Bresson, western photography discovered the everyday life, and deeply penetrated into it capturing its dramas and diversity. Edward Steichen organized the exhibition “The Family of Man”, which contained pictures, selected from hundreds of thousands of photographs, and was the biggest event of the photographic life at the time. It was also the apex of reportage photography, the victory of photojournalism over the pictorial and poetic photography.

But then this rich source began dry up. Television won the battle in a dominating fashion, basically condemning the Hollywood and illustrated magazines to die. The publishers could no longer be satisfied with pictures of amateur singles that had very limited resources. They started more often to commission creative teams that actually, became photo agencies long before. These agencies could fulfil any commission, from military photos, and ending to the spicy photos of beauties that adorned the covers of fashion magazines. 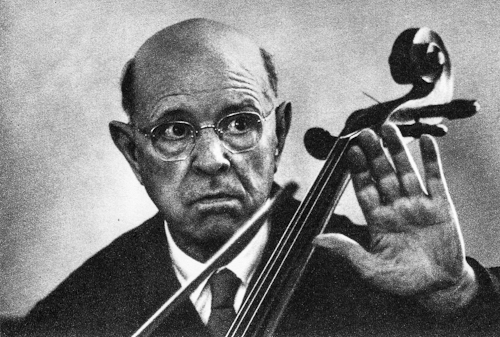 Photo by Rene Burri. Click on the photo to enlarge.

“MAGNUM” secured its place in the history of photography. It firmly entrenched in its chosen field of photography and distributed materials mainly for the “Life” magazine. It did not resort to gangster methods of “scandalous” photographers stalking their victims in the back streets of “sweet life” on the Via Veneto. Agency managed to thrive without the assistance of gangs of apaches and did not resort to extortion, relying entirely on the simple but proven means of ensuring the success of the enterprise: darkrooms, helicopters, money, cooperation of diplomats or even prime ministers.

The optimistic ads prompting amateur photographers to earn money with their own cameras disappeared from the pages of magazines. Nobody believed them anyway. Nobody would pay several hundred dollars for a new camera just because it would allow for a few milliseconds shorter shutter speeds. Those decoys became a thing of the past (or did they? – Greg’s note).

Amateur photography all over the world returned to its true nature of simply love for photography, photographic trade and industry started to decline, but with renewed vigour sounded the photographic poetry, while the so-called “photography of everyday life” started losing his fans. All these phenomena were closely related to each other, although the “Photo-dealer” (a big photo equipment seller) said the source of all evil was Japanese produce and required high duties on imports of Japanese cameras.

Photo by Rene Burri. Click on the photo to enlarge.

However the “Magnum” agency moved its central office from Paris to New York, closer to the editors of the “Life” magazine, closer to sources of funding. This wasn’t particularly surprising: New York, Paris, Cape Town or Sydney – does it matter? This was just a station in endless traveling and the pursuit of pictures.

Photos of “Magnum” agency are still selected very carefully. No imperfect or weak images are allowed to slip to the press. 99 percent of production goes to trash, nevertheless what is left after the selection are images representing the very best of the Western storytelling photography.

But the agency founders are dead – and so is the noble motto of their creative team, calling for humanity and against the war. What remains is the perfectly organized company.