In one of my articles I told you about the wonderful old Czech photo magazine Revue Fotografie. I also complied a pdf photo album with some of the photographs from one of its issues. Since then I have found quite a lot of Revue Fotografie issues, and red many of its great articles, but unfortunately they were all in Russian language, so I can’t display them here. However, just recently I red this article by Ludwig Soucek about the “Magnum” photo agency, which still exists today. This article was written in 1965 and it describes not only the history of the agency but the overall photographic history leading up to that time. I loved this article so much that I decided to translate and share it here. I had to “revise” it a bit because it speaks of some events in present tense while they already long gone – for example when this article was written Henry Cartier-Bresson was still alive and working at Magnum!

I’m sure this article will be of interest to anyone who is into photography. 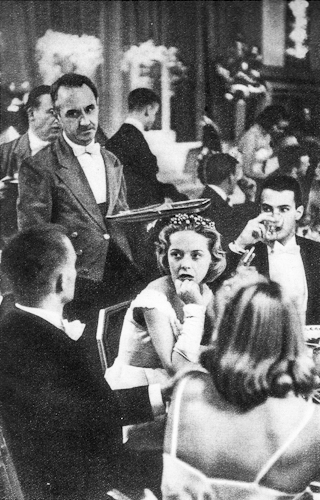 Photo by Henry Cartier-Bresson. Click on the photo to enlarge.

The author of the fundamental piece “The Arts” Hendrik Willem van Loon wrote in 1939: “I am confident that after a hundred years, art researcher will dedicate the same amount of chapters in his book to photography, as well as to painting.” And when this prophecy comes true, then one of the largest chapters will probably be dedicated to the famous “Magnum” agency – a typical phenomenon of the global photography of our age that discovered and showed the world new forms of expression.
In the spring of 1947 three friends gathered together around a bottle of champagne: Robert Capa, Henri Cartier-Bresson and David Seymour, tramps who roamed all the seas and oceans, people with colourful biographies. Judging by their pseudonyms one can hardly guess that the first one is a Hungarian, the second – a Frenchman, and the third – a Pole. They founded a creative team that set a goal to introduce a fair share of sensationalism and emotion into journalistic and documentary photography (through which it would be able to sustain an unequal battle with television) – the humanistic tendencies and personality traits.
They had much to tell. During the Spanish Civil War they were on the same side of the front along with Ernest Hemingway, Ludwig Renn, General Walter (whose real name was Karol Sverzhevsky), and a physician Allen Gorgon. During the Second World War, Henry Cartier-Bresson was taken prisoner, tried to escape twice but without success, and only the third time was successful. Capa and Seymour fought as well – Capa armed with a rifle, Seymour with a camera.
Over a bottle of champagne this new group set its motto: “No to war!” Capa dreamed of photographing children and his beloved country, Greece; Bresson was going to visit the countries in which freedom was just being born – China and India. 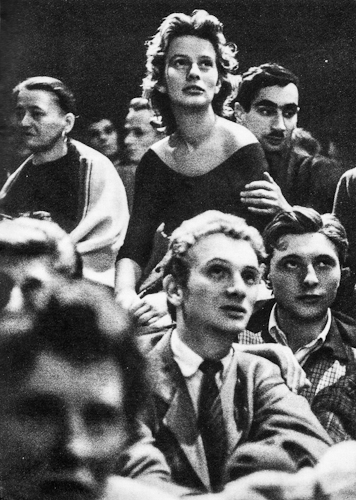 Photo by Erich Lessing. Click on the photo to enlarge.

However,  Robert Capa hit a mine, while as a war correspondent he was shooting a dirty war in Vietnam in 1954. And David Seymour was caught in machine gun fire, when he was in Israeli trenches shooting the report on the Suez conflict in 1956.  Henri Cartier-Bresson was the lone survivor of the group. He became a press photographer of the magazine “Life” and has won great popularity. He also continued to work for “MAGNUM” flying all over the world, and constantly photographing. He would take hundreds, thousands, tens of thousands of images, but did not publish them, did not care about their application and did not create photo-essays from them. All that was dealt with by the Magnum’s headquarters staff group, which called itself “Cooperative for allocation and distribution of reportage photographs”
Agency’s funds, once very scarce – only sufficed for a bottle of champagne – had increased significantly. For the photo on the cover of the Life magazine  in 1965, photographer could  receive anywhere between 500 to 2000 dollars (according to his fame), and fees for the reportage would be twice or three times as much. The number of cooperative members grew. Englishman George Rodger, Austrian Ernst Haas, a Swiss Werner Bischof were the fourth, fifth and sixth members. Werner Bischof died tragically in 1954, falling into the abyss near Lima, where he was sent by the agency to shoot the holy city of the Incas – Machu Picchu.
“MAGNUM” didn’t suffer from lack of personnel though – it was a dream of every photojournalist to become a member of the agency. This popularity brought the agency vast new possibilities and glory. The agency welcomed several new photographers: Marc Riboud, Erich Lessing, Rene Burri, Brian Brake, Inge Morath, and others. All of them used Leicas, advertising the brand, as their shots were way better than any other type of advertising. Those photographers were setting the tone and dictated the fashion in the photography world.
After the Second World War photography captivated the world. Shares of the photographic industry, which was building more and more factories were the most reliable and profitable investment. During 1956 alone, more cameras were sold worldwide than during the hundred years that have passed since the invention of photography. After the WWII small-format cameras alone had sold about 125 million. Photographic companies that had billions in capital, united into powerful monopolies. In Japan, for example, the combined plants Aires, Canon, Fujica, Kalimar, Minolta, Nikon, Yashica, Mamiya, Ricoh, Bronica, Sankyo and others constituted one of the most powerful monopolies in the country. Before that happened, market conditions seemed secured for years to come. Hundreds of millions of amateur photographers, thanks to whom there was photographic market, were willing to buy new cameras having even the most minor improvements. 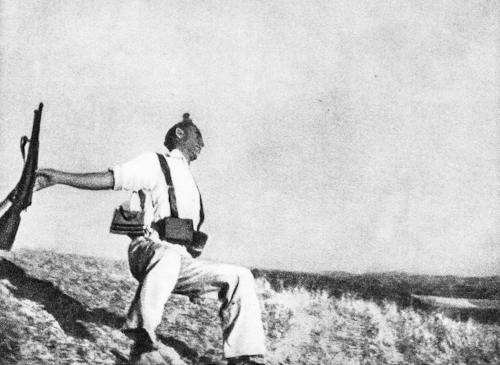 Photo by Robert Capa. Click on the photo to enlarge.

But in 1962, the first time since the Second World War, the number of units sold and materials ceased to grow. Prices have fallen – in some cases up to the one fourth of the original cost. Temporary instability of the market transformed into a crisis. The numbers of the first half of 1964 were very disappointing: out of the hundreds of factories, only three or four (Swedish “Hasselblad” American “Kodak”, German “Franke and Heidecke”) sustained the volume of production. Others clung to a straw – new and cheap models. They promised the maximal use of the film, and ensured  completely successful photographs, but all their efforts were in vain: the photography craze that swept the world twelve years before, vanished.

This phenomenon was caused by a number of reasons. One of them was “Magnum.”